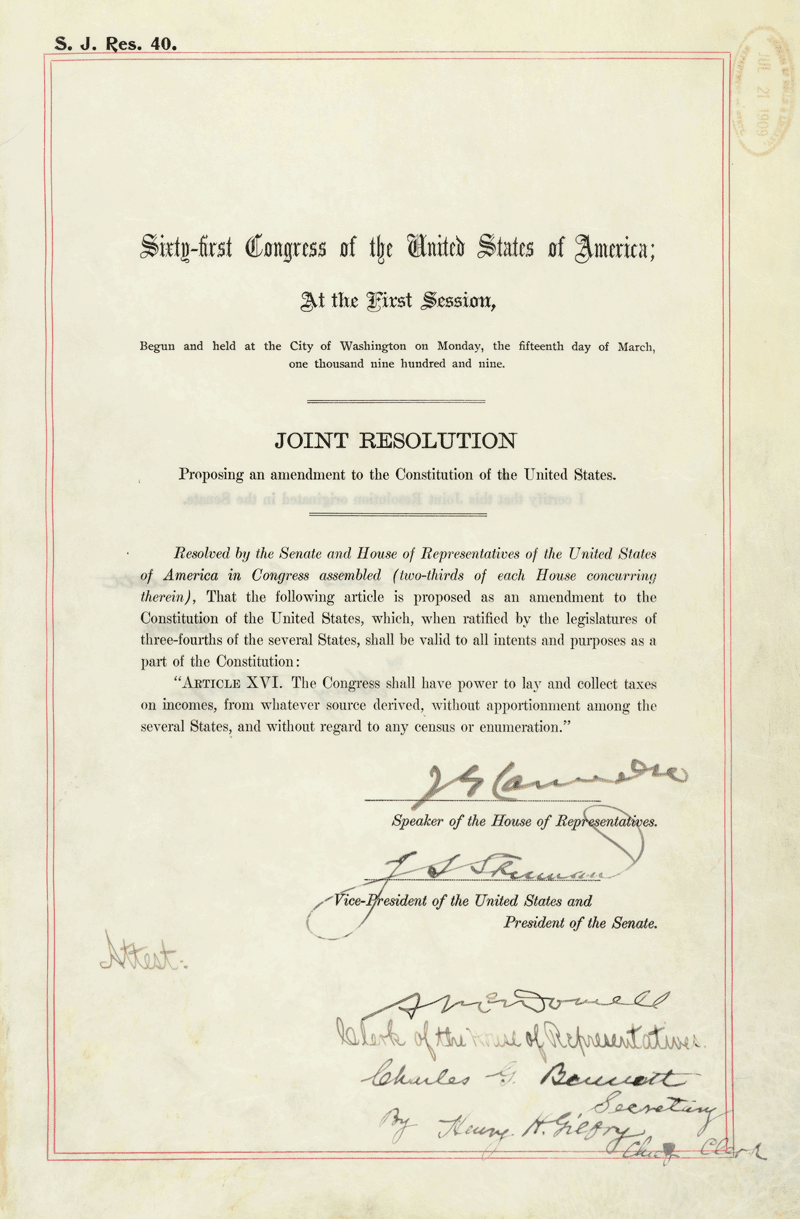 What if we repealed the 16th Amendment and went back to the Framers’ original formula for taxing? What would that look like?

The original revenue-raising solution in Article I Section 2 and Section 9 made things really simple. The federal government could collect taxes from the states according to their populations. But exactly how those funds were collected inside state boundaries was up to the individual states to decide.

The federal government was allowed to raise funds in other ways such as excise and consumption taxes, tariffs, etc., but the states had power to decide for their own people.

What are some of the changes we would see if the Framers ‘original system was reinstated, meaning there was no 16th amendment?

First, we wouldn’t have any more drawn out, overly dramatized, playground bully showdowns of ridiculous give-and-take as we did for President Trump’s common sense 2017 Tax cut bill. The giant majority of those issues would be decided by each of the states.

Second, everyone would be paying their fair share for a change, and the states could protect their most vulnerable citizens from the federal tax collectors.

Third, the argument would turn from “What’s in it for me?” to “How do we reduce federal spending?”

Fourth, the states could handle taxation however their constituents desired. New York could tax its wealthiest citizens at 92% and penalize heavy soda drinkers. California could continue to finance all the sanctuary cities their state welfare system could support (no more federal food stamps or welfare). Florida and others could continue their no-state-income-tax policies. And, the states could decide at what point the poor and non-citizens become shielded from paying any tax at all.

There would be no more heart-attack panic stresses every April 15, at least not from the IRS and its lordly auditors.

We could elect local leaders according to their tax-plan strategies instead of relying on that great black hole of incomprehensible decision-making by strangers in D.C.

There would be more intense pressure on state governments to streamline expenses and priorities.

The Proper Role of our Federal Government and the 16th Amendment

And finally, the entire taxing argument would shift to where it belongs: What is the proper role of our federal government, and how do we put that horse back into its economically responsible barn”

If the federal government’s $4.147 trillion expenses for 2016 were divided proportionally, here’s the tab each state would bear, according to a state’s population.

With such an invoice “due in 30 days” landing at the door of your state legislature, how long would your legislators survive in office if they didn’t pressure all governments at all levels to reduce spending–starting, no doubt, at the federal level?

Paul B. Skousen is a former Reagan White House intelligence officer, and author of How to Read the Constitution and the Declaration of Independence, and The Naked Socialist.